Silversmith Daan Brouwer recently forged a new piece of magnificent quality, hence further developing his impressive oeuvre of contemporary silverwork. The present jug is inspired by the silver-gilt masterpiece created in 1614 by his world famous predecessor Adam van Vianen (1568/9 Utrecht 1627), who had created his jug in commemoration of his younger brother Paulus (circa 1570 Utrecht – Prague 1613), who had died in Prague the previous year. The Vianen jug formed the centre of the important exhibition dedicated to Kwab, or the Auricular Style, in the Rijksmuseum, Amsterdam, in 2019. Adam van Vianen had received this commission from the Amsterdam Silver- and Goldsmith Guild to create an ever-lasting monument of ongoing appreciation and admiration for his deceased brother. 1

The sculptural jug in auricular style, with a separate beautifully chased cover and interior, was moulded out of a single sheet of nearly pure silver in a technically unprecedented manner, while the jug’s handle was also wrought form the same single sheet of silver.

Being a crafted silversmith and knowledgeable restorer himself, Daan Brouwer had been involved in the preparatory studies and technical research of Vianen’s jug prior to the exhibition, and was given the opportunity to hold the Vianen jug in his own hands, to study the various technical aspects within the production of this masterpiece. During this process he gained knowledge, inspiration and courage to start creating his own silver jug, also wrought from a single sheet of silver, in a 21st century design, while applying a 17th century technique.

Hephaistos was first designed as a model, using plasticine. When creating such an object it is essential to learn in which direction the object tends to develop, without risking that the artist looses his way during the process, hence resulting in the whole project failing. In order to forge, mould, reshape, chase, heat, and regularly anneal his material to prevent it from tearing, Brouwer had to apply all of his knowledge, experience and skills in the field of silver smithing to the full, and last but not least his intuition as a silversmith. His jug with an integrated hollow handle was chased from one sheet of pure silver, that he selected in view of its good malleability and because the Van Vianen silversmiths also turned out to have worked with a high silver alloy. Using a less pure alloy the moulding of such dynamic and pronounced turning and intertwined bands would not have been possible.

The present work, that looks different form all sides, was given the title Hephaistos as a tribute to the god of silversmithing and firing, who was the smith of all Greek gods. A fitting title for this unique and beautiful jug, that proves that this objects was created with masterly smithery and artistic craftmanship. 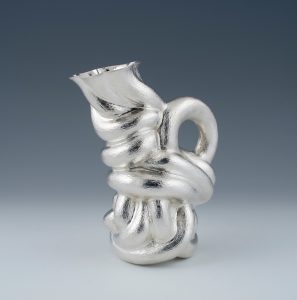